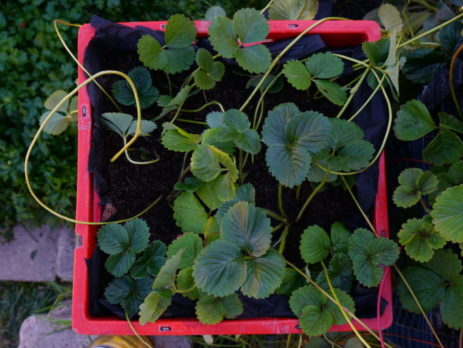 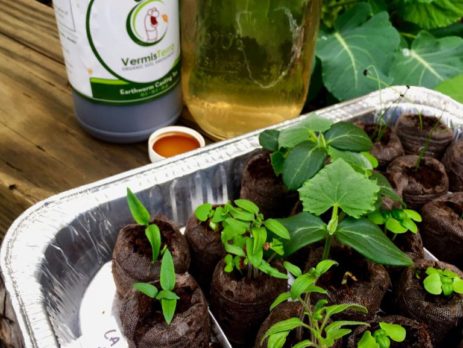 VermisTerra Earthworm Tea – Liquid Gold
Although I had a worm bin at one time, I found it time consuming and difficult to produce the amount of worm castings I needed for my garden, let along produce worm tea.
VermisTerra does all the heavy lifting with their ready made earthworm tea. Their worm tea is microbial-rich concentrate, shelf-stable, comes in a quart or a gallon size, and is a snap to use on my garden. Along with VermisTerra’s worm castings, I have been using their worm tea in my garden for several month – the results are impressive! I like to call it “liquid gold”.

Strawberry Crate Tower watered with worm tea thrives in frost
Strawberry Crate Towers – Many of you have seen my strawberry crate towers in my videos. To test the effectiveness of VermisTerra worm tea, for several months, I watered one tower with VermisTerra worm tea once a week, and the other towers with the same liquid fertilizer I have always used once a week. The strawberry plants watered with worm tea held up to frosts with minimal damage to the leaves, have larger leaves, and are starting to flower. The plants that did not receive their “cuppa” VermisTerra worm tea had significant more leaf damage after a frost, leaves are smaller, and have no flowers. Worm tea at work!

Watch video of Kim’s strawberry towers, and a couple berries where the seeds are starting to sprout called vivipary: Here.